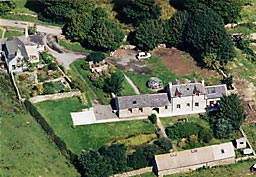 The Swallow Theatre is a restored and converted byre at Moss Park, Ravenstone. It is located about three miles from Whithorn (Scotland’s earliest Christian settlement and one of its very oldest towns) and ten miles from Wigtown (Scotland’s book town). 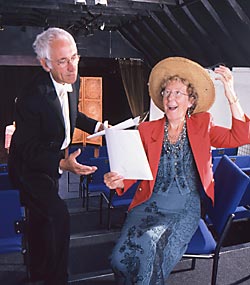 Moss Park was purchased by Jill and David Sumner in 1990. Both had a passion for theatre, and were inspired by the outbuildings at Moss Park to realise their dream of having their own theatre.

Over the next few years some informal play readings were arranged with friends and a small invited audience, and then (in May 1995) an evening of World War II songs and poetry to commemorate VE Day. By that time the invited audience had grown from just three (at the first play reading) to around thirty, with many others expressing interest, so they decided to take the plunge and become an official theatre – a performance space that could be used by local musicians and theatre groups, and visiting artists also.

Planning permission was granted just before Christmas 1995, and restoration work began in May 1996. There were five events over that first summer — verse and music, a Concert Party, a visiting choir and the Solway Festival Poets, and a new play by Jill — ‘The Last Post’, about the Battle of the Somme — in September. 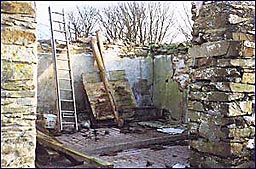 The summer season was great fun but quite hectic, as shows were interleaved between the almost continuous building work. Improvisation was the order of the day: on one occasion a pile of building sand was turned into part of the set! Pallets were acquired from a local garden centre for staging and raising the back rows of seats.

As the audience grew people were asked to bring their own chairs; but thanks to a small Lottery Grant (awarded in 1998) and a ‘Sponsor a Seat’ campaign, the theatre now has a fully retractable seating system with fifty comfortable seats. With the help of Galloway Groundbase, a toilet block was added at the end of 1999 and disabled car parking in 2000.

Jill died in June 2001. The Swallow House was built after she died and is used to provide accommodation to visiting performers, and as a self-catering cottage. The Burnet Room (now the site office but originally used for interval refreshments, meetings, play readings and rehearsals) was opened by Jill’s sister, Ann Hasler, in April 2004.

Each year swallows had nested in the barn, producing at least one brood, sometimes two. During performances the adults birds would swoop through the tiny gap at the top of the barn door, feed their young in the nest (to a short chorus of excited twittering) and fly out again, seemingly unperturbed by the goings on below. So the name for the theatre had to be “The Swallow”.

For obvious practical reasons we have had to exclude the swallows from the theatre itself, but they now nest in the pend (passageway) at the foot of the path on the approach to the theatre.

Over the years the number of productions presented at the Theatre has grown. We try to provide a wide range of events — drama (including original work), music (classical, folk and jazz), poetry and play readings, and ‘theme nights’.

Several well-known musicians, actors and music groups have visited the theatre. The theatre delights in the contribution made by its members and audience, and we hope to revive the tradition of producing ‘home-grown’ events such as a pantomime or a Christmas play, and plays especially written for the small space at ‘The Swallow’. We also aim to produce one professional play in-house each season going into the future. Because the theatre is small and intimate, visitors often comment on the ‘unique atmosphere’.

2016 was an exciting year for the Swallow Theatre as we celebrated our 20th anniversary as a professional venue – it was also the first year of the theatre being under new ownership.

The new owners are as equally passionate about theatre and the performing arts as David still is and Jill was when they built this amazing place. The new owners have embraced the history of theatre and are delighted that David Sumner, the Swallow Theatre Association and other organisations are all working alongside them to bring as wide a range of and number of professional high-quality events as possible to this rural community. They have made a number of improvements to the facilities and the technical equipment which have benefitted visiting companies and audiences alike.

It is their ambition that the theatre created by David and Jill Sumner, along with the help of others who love this place and what it offers, continues long into the future.

You can find out more about which cookies we are using or switch them off in settings.

This website uses cookies so that we can provide you with the best user experience possible. Cookie information is stored in your browser and performs functions such as recognising you when you return to our website and helping our team to understand which sections of the website you find most interesting and useful.

Strictly Necessary Cookie should be enabled at all times so that we can save your preferences for cookie settings.

If you disable this cookie, we will not be able to save your preferences. This means that every time you visit this website you will need to enable or disable cookies again.